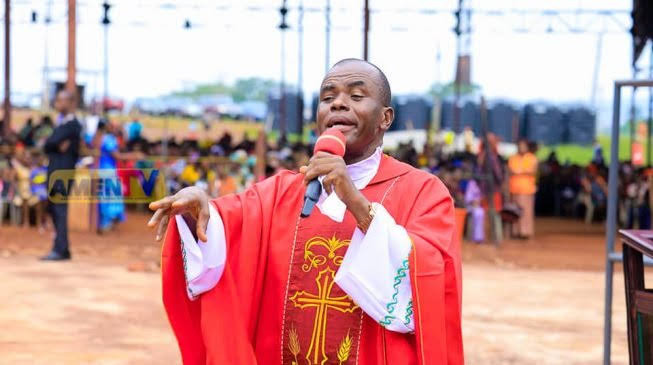 Spiritual director of Adoration Ministry Enugu, Nigeria (AMEN), Fr. Ejike Mbaka has alleged that the leadership of the Catholic diocese in Enugu state wanted to close his ministry for one month. Mbaka made the claim shortly after resurfacing after initially being declared missing.  According to the cleric, the church leadership, led by Bishop Calistus Onaga summoned him over his recent comments concerning Nnamdi Kanu, leader of the proscribed Indigenous People of Biafra (IPOB) and his connection to the presidency. Mbaka said the church leadership told him he would remain indoors for a period of one month to enable him pray and meditate over his activities.  He further claimed that even though he refused to the demand, he was released because of the protest over his whereabout.  He said;  “How can they believe what others say, and they will not believe what the priest is saying? The emphasis is ‘please, let me go to celebrate the mass’, but they said ‘no’. If a priest will request to celebrate mass and they say ‘no’, that means something is wrong. "Allow me to and celebrate mass for my people just for today, I won’t even tell them that I am being punished, they said, No. I will just tell my members that I’m going for 30 days prayer, that after 30 days, we will come back and everybody will obey, they said, No.“I also begged them to appoint another priest to come and celebrate mass for you today, they also said No.“They didn’t treat me in a pastoral way. I was asking ‘am I being punished for what’?“They said it was a meeting, but even before I reached the Bishop’s house, conclusion has already been made. What happened to me was like the day I was shot on the road.“Unfortunately for them, even before the meeting, a woman was already going around bragging that the Bishop will call me for a meeting, and that I was going to leave my house here for 30 days, and that after the 30 days, I would be sent to Rome, and Adoration ministry will be closed."In a time and cases like this, don’t give me a punishment that will cause troubles for us because I’m not alone.”  The post Catholic church leadership wanted to shut down my ministry for one month – Mbaka appeared first on Linda Ikeji Blog. Source