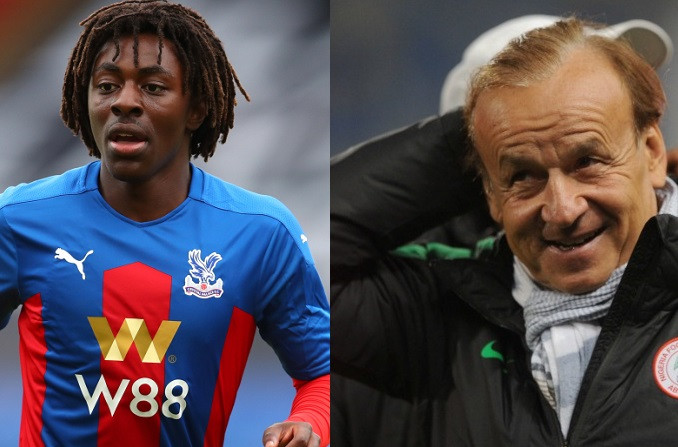 Super Eagles coach, Gernot Rohr has admitted that he wants England-born Nigerian midfielder, Eberechi Eze to commit to the Super Eagles.  The attacking midfielder, 22, was born in Greenwich, England to Nigerian parents. He is eligible to play for both Nigeria and England. Giving update on Nigeria's pursuit of Eberechi Eze to switch international allegiance to Nigeria, Super Eagles coach, Gernot Rohr admitted that the youngster is a 'wonderful player and has already sent a message.  According to him, the Crystal Palace star said he will think about it the possibility of shunning England to play for Nigeria.  “He is a wonderful player, one of the best offensive midfielders in England. I want to have him, but he can also play for England,” Rohr said in an interview by Elegbete TV. “But the boy has to take the decision, we won’t force him. I sent him a message to say we are interested (in him playing for Nigeria), he replied he will think about it. “What we can do is to explain to him how we work and our objectives.” Under Rohr, several players including Kevin Akpoguma, Maduka Okoye, and Cyriel Dessers have switched allegiance to Nigeria.The post “I sent him a message and he replied he will think about it” – Super Eagles coach, Gernot Rohr gives update on Nigerias pursuit of footballer, Eberechi Eze appeared first on Linda Ikeji Blog. Source