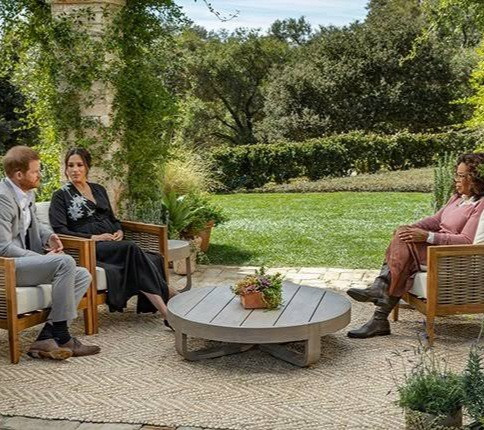 Oprah Wifrey has admitted that she was surprised that Meghan Markle "went all the way there" with allegations of racism against the royal family during her interview with the Duke and Duchess of Sussex. Meghan and Prince Harry made a number of revelations during their interview with Oprah, which aired in March. One of the most shocking revelations was Meghan's claim that royal family members had had "conversations with Harry about how dark [their son Archie’s] skin might be when he’s born". A shocked Oprah asked, "What?" during the interview. Harry later corroborated his wife’s claim, saying the conversation "shocked" him, but refused to identify who had the conversation with him. Speaking to Nancy O’Dell on talkshoplive, Oprah said: "I’m like, 'What? You’re going there? You’re going all the way there'.’" Oprah told Nancy O’Dell that she had only texted with Harry, 36, and Meghan, 39, before the interview. Oprah explained: "Whenever I’m doing interviews with anybody for anything that is significant, I have a conversation with them before. "I didn’t see Harry and Meghan before but I did text them and say intention is very important to me, tell me what your intention is, so that we can be aligned in our goal. And our shared intention was the truth. They wanted to be able to tell their story and tell it in such a way that allowed them to be as truthful as possible." She continued: "The reason why it was such a powerful interview — first of all, I know how to ask questions, and you [Nancy] know how to ask questions, we all know how to do our jobs, but what makes it powerful is when you have someone else who is willing to be as open, as vulnerable, as truthful, as they were. "So, I don’t give myself credit for that, I give myself credit for asking the questions, but the reason the interview was what it was, was because they answered the way they did."The post Oprah Winfery says she was surprised Meghan went all the way there with racism claims in bombshell royal interview appeared first on Linda Ikeji Blog. Source