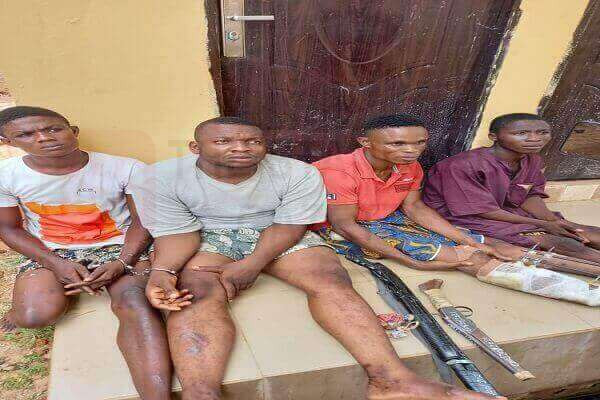 The Edo State Police Command has arrested four members of a notorious robbery gang terrorising Edo Central and environs.  The suspects, Yahaya Musa, Isah Ismaila, Osas Amas and Nathaniel Omozebagua, specialized in snatching of cars and attacking of Point of sales shops.  They had allegedly snatched several cars in Esan land, which they sold in Northern part of Nigeria.  The suspects were arrested a few days after they attacked a Point of sales shop in Uromi and carted away the sum of N5.2m The POS operator had pursued the robbers who came on motorcycles with his car and knocked them down. Two suspects escaped unhurt while one of them sustained severe injuries. Police officers travelled to Enugu State to arrest one of the gang members while another was arrested in a hospital in Benin, where he was receiving treatment for the injury he sustained. The other suspects were arrested in Ekpoma. Spokesperson of the State Polce Command, SP Bello Kontongs, who confirmed the arrest on Monday, May 3, stating thar the suspects would be profiled and charged to court soon.The post Police arrest four-man robbery gang terrorizing Edo communities appeared first on Linda Ikeji Blog. Source