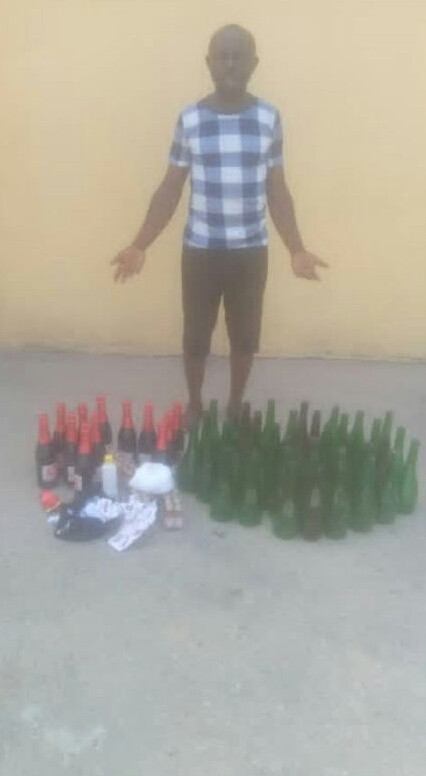 The Delta Police Command has uncovered an illegal local brewery in Ovwia community, Udu Local Government Area of the state and arrested a suspect.  Acting spokesperson of the command, DSP Bright Edafe, who disclosed this in a statement, on Thursday, April 29, said the Commander of State Anti Cult Unit (SACU), led the team on a sting operation leading to the arrest of the suspect on April 16 at about 8:30 p.m. "SP Christopher Igbaji after due intelligence gathering, mobilised operatives from SACU on a sting operation with the civilian Anti-cult Volunteer Corps and arrested one Kenneth Ajie ‘m’ of Amadaga village and uncovered an illegal factory where fake alcohol is been produced at Ovwia in Udu Local Government Area of the state" he stated.  The suspect, who produces these fake wines in his house and branded his product Akesco Wine & Beverages Aladja Communities Nigeria, was operating without any license. "According to the suspect, he sells the wine for N300 per bottle and N3, 600 per carton, he confessed that he uses bottles that have already been used and disposed of for N10.00 each and that he also buys the cork from the open market.," the statement says.  "He claims he washes the bottles himself, cork the wines himself, sells to members of the public, and produces about one to three cartons per day all alone,” Edafe added. The post Police uncover illegal brewery in Delta community, arrest one appeared first on Linda Ikeji Blog. Source