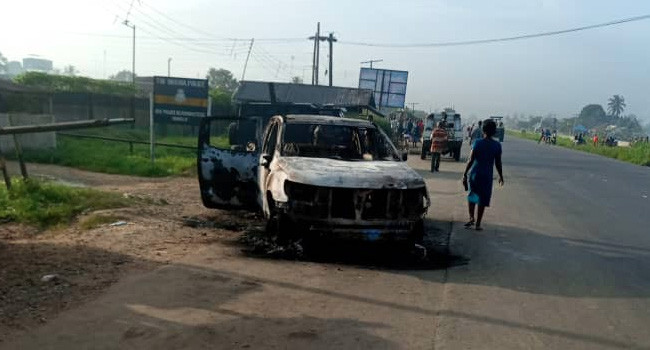 The Rivers State Police Command has confirmed the death of seven officers during attacks by gunmen in the state on Friday night May 7. In a statement released today May 8. the spokesperson of the state police command, Nnamdi Omoni, described the killing as “unprovoked and mindless”. According to Omoni, the gunmen who drove in two branded Hilux vans, attacked the special checkpoint at Choba bridge, in the Ikwere Local Government Area where two Policemen on duty were killed in a surprise attack and a private car belonging to one of the policemen set ablaze.Omoni said a similar attack was launched at Rumuji Police Station in Emuohua Local Government Area of the State by the same hoodlums and that two policemen on duty were killed and a police patrol vehicle burnt.He said during the exchange of fire, two of the attackers were fatally wounded and died on the spot.He added that the gunmen proceeded to attack the Elimgbu Police Station in Obio/Akpor Council where three officers were killed in the attack. He said the intense gunbattle led the  hoodlums to abandon their bullet-riddled Hilux van. He said they escaped with various degrees of gunshot wounds with a snatched Sienna bus.Omoni said in all three attacks carried out last night, no Police Station/formation was burnt but that a total of five assault rifles were lost in the incident. He enjoined the residents of the state to increase their security consciousness and report any person or persons with gun wounds to the nearest Police Station or call the following numbers 08032003514 or 08098880134.The post Rivers state police confirm death of seven officers killed by gunmen appeared first on Linda Ikeji Blog. Source