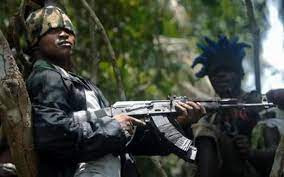 Two police officers have been killed by unknown gunmen who attacked police facilities in Emohua local government area (LGA) of Rivers State. The Nation reports that the gunmen on Friday night May 7, first stormed and destroyed the C4I checkpoint located after Choba bridge without killing any officer. They then proceeded to Ogbakiri junction where they killed a police officer on duty. They attackers were also said to have moved to Rumuji Police station where they killed another officer, beheading him and razing two patrol vehicles before escaping through Elele Alimini axis of the East-West road. According to the report, the gunmen who came in a Hilux van and wore two different security uniforms to deceive policemen on duty, operated without any challenge from security forces. The state police command is yet to comment on this development.   The post Two police officers killed in Rivers state appeared first on Linda Ikeji Blog. Source